Right Sector leader: Kiev should be ready to sabotage Russian pipelines in Ukraine.

Right Sector leader: Kiev should be ready to sabotage Russian pipelines in Ukraine 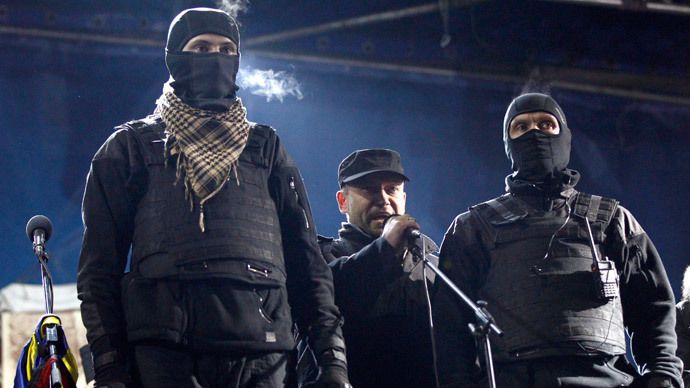 The leader of ultranationalist group Right Sector, Dmitry Yarosh, has threatened to destroy Russian pipelines on Ukrainian territory if a diplomatic solution is not reached with Moscow.

In a fiery address loaded warmongering rhetoric, Yarosh told his followers they should be ready to resist the Russian “occupiers.” The leader of the Right Sector made his address to the coup-appointed government in Kiev, as Crimeans made their way to ballots Sunday to vote to join with Russia or to remain within Ukraine.

“We cannot allow the enemy to carry out a blitzkrieg attack on Ukrainian territory. We mustn’t forget that Russia makes money sending its oil through our pipelines to the West. We will destroy these pipelines and deprive our enemy of its source of income,” Yarosh said.

Continuing the bellicose rhetoric, Yarosh appealed to his followers, urging them to take up arms against Russia, if a diplomatic solution cannot be reached.

Yarosh said that Crimea was too small to satisfy the appetite of the “Russian Empire,” and that the Kremlin would seek to take over the whole of Ukraine.

“Let the ground burn under the feet of the occupiers! Let them choke on their own blood when they attack our territory! Not one step back! We will not allow Moscow’s beserk, totalitarian regime to spark a Third World War!”

The phrase “Not one step back!” was used in a famous order by Joseph Stalin during WWII and became a popular slogan for the Soviet people’s resistance against the Nazis. Yarosh’s use of this particular rhetoric attracted attention from many observers, given that the members of his Right Sector group are known to use Nazi insignia.

Russia put Yarosh on an international wanted list and charged him with inciting terrorism after he urged Chechen terrorist leader Doku Umarov to launch attacks on Russia over the Ukrainian conflict.

Yarosh has declared his intentions of running for Ukrainian president in May.

The Right Sector movement, an amalgamation of several far-right groups, was formed in November 2013.

Members of the radical movement were very active in the violence which triggered the ouster of President Viktor Yanukovich. The Right Sector refused to recognize the Feb. 21 agreement between Yanukovich and the opposition leaders, and declared that they would fight him until his ouster.

Right Sector’s fighters used clubs, petrol bombs and firearms against the Ukrainian police. Even after the coup, some members of the movement continued to use rifles and pistols.

Last week, a proposal was submitted to the Ukrainian parliament, suggesting that Right Sector be transformed into a regular unit of the armed forces.