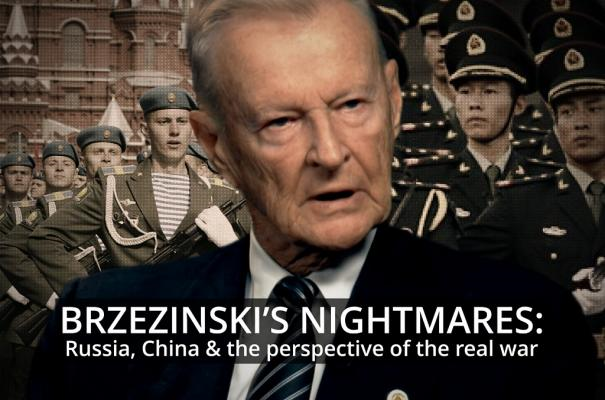 In his last public rant (“Toward a Global Realignment,”

Obviously his ego doesn’t allow this decrepit war criminal to retire from his bankrupt role as strategist of the US elite. He still wants to convince the Wall Street big sharks that he can save them from what he say is an imminent catastrophe. Forgetting that the foreign policy of the US has been based on his crazy plans (especially, but not only, since the election of his protégé Barak Obama), Brzezinski tells his masters that the US could soon lose their dominant position, and/or they could even be soundly defeated militarily if they go to war with their “rivals” Russia and China.

What can be done? What is his plan? His only solution is to split China from Russia and to convince one of the two “rivals” to partner with Washington against the other. Far fetched to pathetic, to say the least.

Clearly referring to Russia’s adamant refusal to surrender to the economic, financial, military and psychological warfare unchained against it, Brzezinski warns of a “rival” who could be able to deploy “new weapons systems” that will force the US to choose between a mutual assured suicide and the loss of its dominance.

Thus, “the sudden acquisition by some state of the capacity to render America militarily inferior would spell the end of America’s global role.”

Brzezinski warns that this will mean “probably global chaos” (sic). That is why the US has to decouple Russia and China, immediately; and transform one of the two into a partner. But (painful dilemma) which one should be the enemy and which one should be the partner? Zbig explains that the US elite must “contain the least predictable but potentially the most likely rival to overreach…“ And who is that? “Currently, the more likely to overreach is Russia.” So, an alliance with China against Putin’s Russia? Not so fast, hisses the doubtful snake. In fact “in the longer run [the more likely to overreach] could be China.”
Hmmmm.

Maybe, the criminally incompetent maître a penser of the Wall Street sharks is trying to split the two “rivals” offering a “partnership” to the first who raises his hand. In this case, we would be witnessing an abysmal delusion, an embarrassing show of impotence!

The last sloppy lucubration of the reptilian strategist also contains his assessment of Europe and the Europeans; what he thinks of them but doesn’t care to say openly. While apparently so hesitant on what to do globally, Brzezinski has no doubt about the Europeans. They are totally defanged, under control, unable to present any actual or potential danger for Anglo-American dominance. They will keep obeying every order against their sovereignty and basic economic interests; they will masochistically strengthen the NATO cage; and they will be progressively and irreversibly weakened to irrelevance and chaos by the well-organized migrations from the South (known as “Awakening” in Brzezinskite language).

The US shall make sure that the Arab Springs and civil wars will continue and escalate in order to get two birds with one stone:

1) Enabling, through covert and overt means, the spiraling destabilization of Middle East and North African (MENA) countries;

2) Favoring, through covert and overt means, increasing refugee waves into Europe from these destabilized countries.

Brzezinski justifies and incites violence from these desperate masses (a deliberate result of his policies) against Europe, explaining with unlimited hypocrisy, “the currently violent political awakening among post-colonial Muslims is a belated reaction to their occasionally brutal suppression mostly by European powers…”

Thus, the Europeans must now be subjected to revenge for their colonial sins, stresses Brzezinski.

It is unbelievable that no major government, party or organization in Europe and MENA is reacting and denouncing this coldly engineered double assault. The expression “Global Political Awakening” (like the expression “Grand Chessboard” for the plan to isolate and destabilize Russia and the whole Eurasia), was invented exactly by Zbigniew Brzezinski. See The Global Political Awakening published in the The New York Times on December 16th, 2008, as a public marching order for his just elected protege’, Barak Obama. http://www.nytimes.com/2008/12/16/opinion/16iht-YEbrzezinski.1.18730411.html

Brzezinski, also then, in 2008, was very busy trying to find the magic pill to assure the survival of the Wall Street vampires’ power that had been seriously eroded by the criminally demented Cheney-Bush presidency, and was facing a growing rebellion from Europe (especially France, Germany, Italy) who were actively pursuing an economic and political partnership with Russia.

In his article, Brzezinski was visibly boasting that Obama was in fact, his docile Faustian homunculus. He was also giving the Anglo-American elite his regular magic recipe on how to save their dominance. "A new president is assuming office – he intoned - in the midst of a widespread crisis of confidence in America's capacity to exercise effective leadership in world affairs. That may be a stark thought, but it is a fact…The resulting challenge is compounded by issues such as climate, health and social inequality - issues that are becoming more contentious because they have surfaced in the context of what I call "the global political awakening.”

What he called “global political awakening” was nothing else than an update of his main dirty trick in 1978-79: the creation of Al Qaeda in Afghanistan to “give the Russians their Vietnam.” http://dgibbs.faculty.arizona.edu/brzezinski_interview

The creation and manipulation of social upheavals — variously called Color Revolutions, Arab Springs, and so on — were the perfecting of the same criminal dirty tricks: how to trigger a coup d’état without paying for the consequences of public involvement. Brzezinski’s so much over-estimated geopolitical ability has been mostly limited to the creation and manipulation of terrorism, organized crime, media campaigns, propaganda -- all to obfuscate and cover up criminal operations that otherwise would be simply and openly acts of wars.

But now, the crumbling snake can do very little not only to cover his long list of war crimes, but also his impotence.